Many local residents who grew up in Schodack have fond memories of school trips in the 1940s and 1950s to visit Elsie, the Borden Cow at the Payne Farm in East Schodack. When not on nationwide tour Elsie resided with the rest of Ira Payne's prized herd of Jersey cows at Moordenier Hills farm in East Schodack. 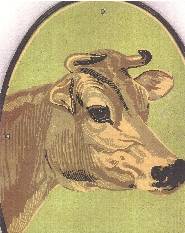 The history of Elsie the Cow began in the late 1930s as a cartoon of a laughing cow called Elsie used to advertise Borden milk products. Interest in Elsie heightened at the 1939 New York Word's Fair when the Borden Company featured live Jersey cows in their exhibit. Overwhelmingly the most frequently asked question was about which cow was Elsie. A cow named "You'll Do Lobelia" was chosen at random from the herd to represent Elsie and was described as a "big, easy-going, wistful-eyed" Jersey cow. She was renamed Elsie and the original 1930s cartoon had come to life. 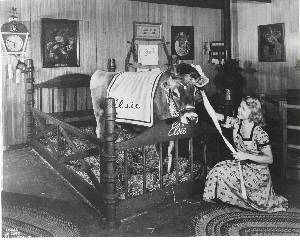 Interest was very high in Elsie after the fair and requests came in from all over the country for a visit from Elsie. In 1940 Elsie became "wife" to Elmer and a mother to the calf Beulah. Elsie and her family traveled around the county in a trailer containing a boudoir called "Barn Colonial." An early postcard describes among other items "Elsie's dressing table, made of barrels has milk bottle lamps and her toiletries include Tail Wave Set, Henna Fur Glaze and Meadow Mud Pack." The family traveled in style. 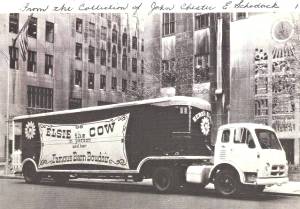 Mr. Payne was injured in a horseback riding accident in 1953 and died from his injuries. Mr. Payne's death also halted plans of the Borden Company to build a model dairy farm at Moordenier Hills. Some of you may remember Mr. Payne as one of the founders of Hamilton Printing, later run by his son and grandson.

As the decades went by interest in Elsie and her traveling family waned and eventually Elsie was retired. The symbol of the Borden Company lives on, featured on Eagle Brand sweetened condensed milk and Borden Cheese products. Elmer, used to represent Borden's chemical division, lives on as the advertising symbol for Elmer's Glue.

The pictures accompanying this article show a picture of Elsie on a printed sign used at the Payne farm, an interior view of Elsie's traveling boudoir and Elsie's travel trailer.